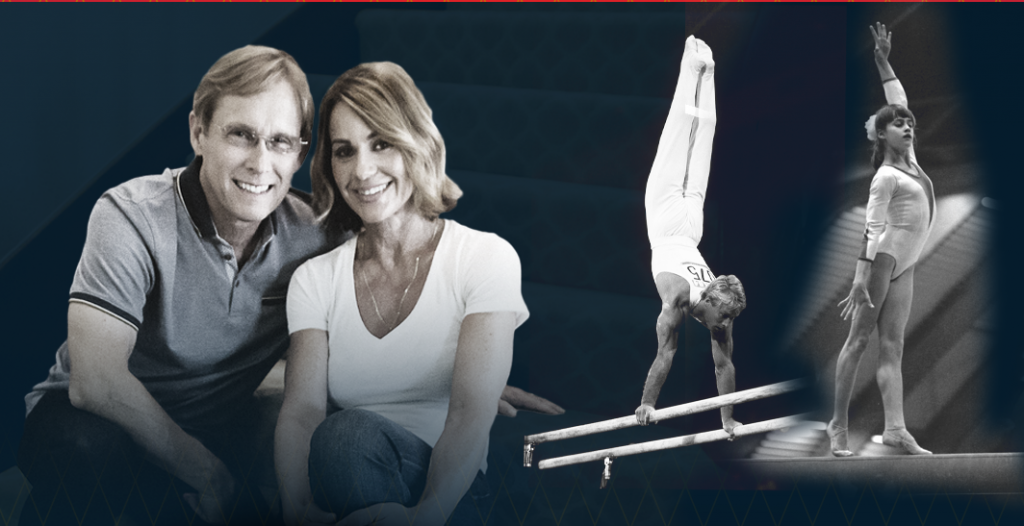 When you burst onto the scene with perfection, it’s all downhill from there. Unless you’re Nadia Comaneci, and you get a little help from Bart Conner, and then you combine to create a force for good that transcends the boundaries of sport and country.

The story of Bart and Nadia has all the elements of our other Lifetime Achievement honorees – excellence in athletics, sportsmanship, generosity, kindness, class, humility, compassion − with a little romance and international intrigue added for zest.

As a 14-year-old from Romania, she became known simply as “Nadia” when she earned the first perfect 10 ever awarded in gymnastics. She went on to earn seven perfect scores, three gold medals, one silver and one bronze at the 1976 Olympics in Montreal.

“Suddenly the world was humming Nadia’s Theme, and girls were flocking to the gym,” said John Burkel, Bart’s first coach, noting that her popularity led to the rise of the U.S. as a power in women’s gymnastics.

Bart was an eyewitness, finishing 46th in the all-around competition. His own ascendency would take longer, but no matter. He loved the daily grind. “He thought the world looked better walking on his hands rather than on his feet,” Burkel said, “and he had the foresight to know what he wanted to be at 10 years old − an Olympian.”

His pure enjoyment of the grunt work and love of competition made it happen, as he became the first U.S. gymnast to stand atop the podium at the U.S. Championships, NCAA Championships, Pan-American Games, World Championships and the Olympics.

Nadia earned four more medals at the 1980 Games in Moscow but had retired from competition by 1984, when her future husband achieved perfection on the parallel bars en route to two gold medals at the Summer Games in Los Angeles. At that point, though, she had begun touring for her home country. After years with little pay and even less freedom, Nadia defected to the U.S. in 1989.

About a year later, Bart took the first step toward entwining their paths for good − and forever. He scheduled a TV appearance to coincide with one of hers, at which he presented her with roses. The two promised to keep in touch, but only after moving to Montreal did Nadia return Bart’s kindness with long phone calls.

“Bart was judged his whole life on his athleticism,” his former coach said. “Beneath all his gold medals, though, beats a heart of gold.”

From there, romance blossomed. Nadia eventually moved to Bart’s base of operation in Norman, Okla., where he ran a gymnastics program and other businesses, but the two held their wedding as a state affair in Romania. From these two disparate locales, their influence has radiated throughout gymnastics and beyond. They have impacted:

Together, they remain ambassadors for their sport − even if Nadia still gets the bulk of the applause. But perhaps neither would have transcended gymnastics without the other and impacted the lives of so many young people around the globe.

“A few people might know about me in the United States, but the whole world knows about Nadia,” Bart said. “And I’m proud of that.”